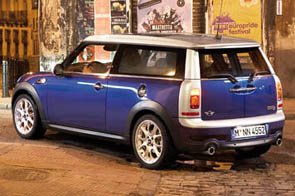 After months of unsurprisingly quite accurate speculation, BMW has finally taken the covers off the new Mini Clubman – except actually it hasn’t, because this trend setting new model will be the first car ever to come as standard with a set of fiberglass disguising panels, just like the ones used by car test drivers on their exciting engineering prototypes.

‘We keenly monitor what car buyers like,’ said a spokesman who is speaking now. ‘For example, a few years ago we noticed that everyone was fascinated by pictures of Euro NCAP crash tests so we came up with the Z4 which permanently looks like it’s been in some sort of accident. In the case of the Mini Clubman, we realised that people are always interested in spy pics of disguised pre-production cars, so we decided to make a showroom car that was as crude and lumpen as they are’.

After an intensive design programme, BMW high-ups are said to be delighted with the finished look of the unique Clubman rear end which includes authentic development mule features like ugly, mismatched D-pillar cladding and ill-fitting, unattractive tail lamps, just like an early development hack.

The Clubman is also noteworthy for the inclusion of a right-hand side ‘suicide door’, so called because although this is supposed to be a British car, if you live in Britain and you actually tried to get out of it on a busy road, it would be suicide.