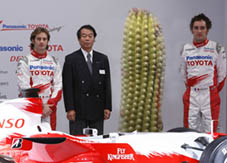 After months of disappointment punctuated by the odd adequate performance, like swimming through liquid effluent to find a bag of plain crisps, Toyota F1 bosses have finally lost patience with Ralf Schumacher and today announced that he is to be replaced… by a cactus.

‘We’ve simply had enough of Ralf being mediocre and then going backwards towards a field, so we decided to replace him with something more suitable’, said a Toyota spokespeakerman. ‘Once we heard a cactus was available, we moved quickly. We believe the driver changeover will be very smooth, especially since we’re used to having something prickly and uncommunicative in the car. And with a big spiky plant behind the wheel, at least one of our drivers will no longer be pointless. Arf arf! Sorry…’

This isn’t the first time a succulent has competed in top level motorsport. A phyllanthus drove in Indycar from 1985-87 whilst a tapinanthus ran as high as third in the 1992 Le Mans 24 Hour event before someone overwatered it.

With thanks to F-Stop Junkie