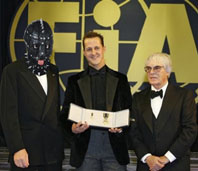 Formula 1 racing boss Max Mosley is in hot water this week as Sniff Petrol has exclusively obtained video footage showing the motorsport supremo engaged in SICK activities including pretending to be IN CHARGE of the FIA.

During the 15 YEAR session captured on tape by our spies, Mosley insists on being referred to as THE PRESIDENT and makes those around him follow STRICT RULES, which he then repeatedly changes.

Amongst the DEPRAVED acts caught on camera, our footage shows the F1 figurehead wantonly PUNISHING McLaren for MONEY. He later SPANKS Renault and, in scenes of unbelievable hypocricy, then KISSES THE ARSE of Ferrari.

In some scenes the grey haired racing ring master is even shown HANGING OUT with a DWARF, although this later turned out to be Bernard Ecclestone.