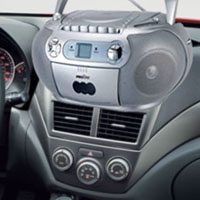 ‘We are delighted to announce our new link with Proline,’ said a Subaru spokerman. ‘We looked long and hard for an audio equipment manufacturer that was a good fit with the brand values you see in the dashboards of our cars, namely horrible silver plastic and wanky LED displays. Proline were able to offer this, and so much less, all for £19.99. Which funnily enough is exactly what we spent developing the dash in the new Impreza!’

Japanese sources say the new Subaru Proline hi-fi set-up will boast all the sophisticated features buyers expect from upspec in-car audio, including a class leading twin tape cassette deck with industry standard high speed dubbing and that thing that leaves longer gaps between songs so the tape search thing can find each track. Audiophiles can also expect to see upmarket features such as a graphic equaliser with up to five little slider things, all of which do almost nothing except feel like they’re going to snap off.

‘This is really premium stuff,’ said Subaru’s speaksman. ‘Like, I mean, when you eject a cassette the tape deck door opens really slowly and smoothly rather than boinging open. Oh God, like, my sister, she’s just put a Nik Kershaw sticker on it, that is, like so unfair. God’.

However, industry spies say that Subaru cannot afford to rest on its ICE laurels as Ssangyong is only days away from announcing a new in-car multi-media system alliance with Acorn computers, makers of the BBC Model B. ‘You can play Elite on it,’ said a spoeaksmn.