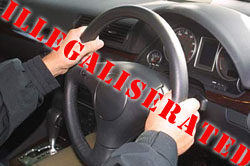 After cracking down on drivers who use a mobile phone, smoke or eat, the government this week announced that it is considering an even more radical safety move – making it illegal to use a steering wheel.

‘Our research shows that having to grapple with a large circular device whilst in a fast moving vehicle could be quite literally lethal,’ said Lesbo Bells, spkoksman for the Department of Wasting Everyone’s Time With Unbelievably Patronising Shite. ‘That’s why we’re looking at proposals to make this dangerous pursuit illegal as soon as possible’.

DoWETWUOS sources say the proposed new ruling will be enforced with a raft of new digital cameras, mounted on top of other cameras which will be used to read people’s Switch cards so that all the money can be drained from their account the instant they are seen doing anything illegal involving a motor vehicle, such as driving it, sitting in it or looking at it with anything but that sort of dismal, lemon sucking face that people on bicycles do.

‘Banning people from using the steering wheel whilst on the move will significantly reduce accidents and road casualties,’ Mr Bells claimed. ‘Do you have a car?’ he added. ‘Oh good, please give me another £538 for no reason whatsoever’.

The British weather is extra hot and sunny at the moment, and that brings extra driving hazards. Stay safe this summer with helpful tips from our friends at Mulverhoosen’s soups.