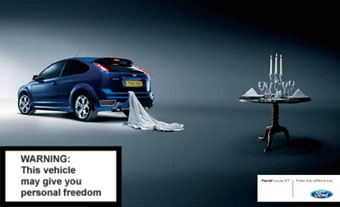 There was reassurance this week for people who like to be patronised so horribly that one of their arms falls off following news of an EU proposal to put cigarette packet-style large print warnings on car advertisements.

‘We realised that we hadn’t been wasting nearly enough of everyone’s time with condescending nonsense,’ said EU spokeringman Alain Turdisquirts. ‘That’s why we are making this proposition, in the hope that people will spend more time thinking before they buy a new car. Specifically, that they will think: Gosh, aren’t the EU a bunch of mithering fucking money wasters’.

The exact wording of the new warnings is as yet unclear but, in line with the EU’s stance on not allowing anyone to enjoy themselves, proposals are said to include ‘Danger: This car may allow you to get to places you want to go’, ‘Attention: This vehicle may accidentally cause you to have some fun’ and ‘Warning: This car may prevent you from having to trudge around in the rain trying to find a bus stop that isn’t full of used heroin’.

As an added bonus, Mr Turdisquirts was quick to reassure EU residents that similar warnings will NOT be appearing on power stations, industrial chimneys and domestic boilers. ‘Why would we want to do anything about the real sources of CO2 when we can just pick on cars again,’ he said, like the blinkered, patronising, reactionary cockbag he so clearly is.

eBay cracks down on car ads