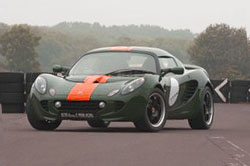 The Elise 5001 will come only in a distinctive shade of green that is exclusive to this model, even though it’s almost identical to another colour that was on some other Elise last year, or maybe the year before. This will be topped off by an orange stripe that is unique to the 5001, although you can order it as an option on other Elises.

Completely the exterior makeover are a set of distinctive alloy wheels with one very special feature – where the regular Elise offers only black painted wheels as an option, the 5001 boasts alloys that are sprayed very very very dark grey.

Inside, Lotus promises a number of changes, although it warns that ‘a number’ is actually quite a vague expression and can of course include ‘a number’ such as one. That’s why the 5001 will come with an exclusive badge badly stuck to the dashboard and some seats and stuff that are just out of the normal car.

If you could spec all these options on a regular Elise, which actually you can, it would cost you £35,990, whereas the 5001 will retail for just £35,985. The bad news is that, with so many special editions to make, Lotus has been forced to limit production to a total of just one 5001. However, Hethel sources say the company is already planning its next exciting new special edition model, tipped to be called the Elise Milking It.