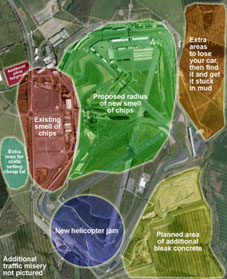 Whilst the BRDC continues to act as if it isn’t annoyed by Bernard Ecclestone’s pretend plans to move the British Grand Prix to Donington or Brands Hatch or the Birmingham Superprix circuit or something, the Silverstone circuit itself is about to undergo an exciting revamp that will surely make it the best Formula 1 facility in Northamptonshire.

The new developments won’t be ready for this year’s British GP of course, but work will start on them the very second the last car has left the circuit’s car parks after this year’s race. And when those bulldozers kick into action in September, they’ll have quite a job on because Sniff Petrol has seen the new Silverstone plans and they’re certainly ambitious, whilst retaining the character of the probably-loved circuit and building on its strengths.

One of the first areas for attention is bleakness. For years, the British Grand Prix at Silverstone has been famed for the flat, unremitting miserableness of its views and the facelift scheme seeks to capitalise on that by levelling many of the surrounding fields and building over them with huge expanses of grey, slightly cracked concrete. In the original redevelopment plans, these areas could have been used for race day parking but in fact the planners have been much more canny than that, carefully securing an addition 30 acres of damp, muddy field in which people can lose their cars.

Finally, it wouldn’t be Silverstone on Grand Prix weekend without the overpowering smell of chips and, under the new plans, that disgusting stench will be more all-consuming than ever thanks to a massive increase in chips stalls and a state-of-the-art fan system which will mean almost no part of the circuit will go without a vile greasy smell getting into the back of everyone’s throats.

The exciting new Silverstone facilities are expected to be ready just around the time Bernard Ecclestone decides he can’t be bothered having a Grand Prix in Britain at all any more.

A Christmas drive, with Roy Lanchester