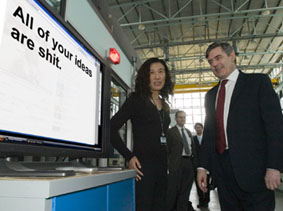 Gordon Brown shocked car makers this week by announcing that all cars must be electric by next Tuesday. Speaking at some dreadful symposium or other, the Prime Minister outlined his radical new plan which he had drawn on the back of a Chinese takeaway menu whilst he was rifling through The Independent’s website looking for more crap and ill considered ideas about reducing CO2 emissions.

The PM underlined his commitment to things he clearly knows fuck all about with a sensational £497 billion commitment to improve the country’s electric car infrastructure. ‘I want Britain to become the electric car capital of the world,’ Brown stated. ‘I hope that people from other nations will come to Britain and see our cities full of flimsy, slow moving fibreglass cars and think, yes, this is a modern, successful country’. When asked how the new infrastructure investment would be spent, Brown added that there would ‘probably be more plugs in the street and stuff’.

The Prime Minister finished his speech, in which he was plainly reading words off a page with no idea what they mean, up to and including the word ‘car’, by outlining an even more radical plan to supply the electricity that will power Britain’s electric car fleet. ‘Fossil fuelled power stations emit high levels of CO2,’ he said. ‘There is also a great deal of controversy surrounding nuclear power stations. That is why I am announcing that in future all British power stations will run on electricity’.

Mr Brown then left the stage before anyone could point out that his transport policy is utterly fucking clueless.

Britain to decide on 8 June

In a surprise move, Prime Minister Theresa May has called for Britain to decide if it is going to keep supporting McLaren.