A STATEMENT FROM THE FIA 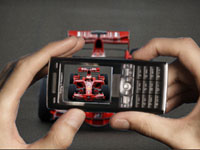 The FIA today issued the following statement in response to allegations in the UK media.

“It has come to our attention that the private activities of the FIA and Ferrari at Spa have been filmed and distributed to the general public over the last weekend, together with false statements that the events depicted had a ‘sporting’ theme”.

“The activities depicted were a private matter between the participants, all of whom were consenting adults. Suggestions that one of the ‘victims’, a Mr L. Hamilton, was a child are completely untrue.  He is a consenting adult who just looks underage and he was financially rewarded for his subservient part in the role-playing of the dominant participants”.

“Parades of Ferrari automobiles are perfectly legal when conducted in private by consenting adults, even when they include role-play. We regard the media tactics to be most intrusive. Some even used helicopters to film the private activities of the participants. The FIA utterly refutes any suggestion by the media that what took place at Spa was meant to be a ‘sporting event’ and will pursue a case for libel against those who have made such scurrilous allegations.”

That FIA tribunal verdict in full