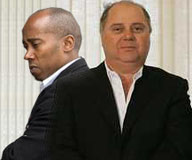 The Brazilian Grand Prix was one of the most exciting climaxes to an F1 season ever seen and in the end it came down to a battle between just two men. Those men were Anthony Hamilton and Luiz Antonio Massa, and after 71 laps only one of them could be victorious in what has been an epic season-long fight for more TV time.

Massa made a mighty start with a world class display of looking pensive and quickly pulled away all the cameras from the McLaren pit, although Hamilton quickly fought  back with a fine demonstration of looking intense and concerned.

However, by the first pit stops it was the Brazilian who held the upper hand – and the attention of the cameras – with a series of excitable hand gestures that his British rival appeared unable to match. Within a few laps, however, Hamilton was back in the game – and on the telly – with a truly impressive focussed stare at a monitor in the garage.

Massa was fighting valiantly with some swiftly dispatched finger crossing but appeared unable to get the better of the Englishman. Then, just after the second pit stops, disaster for Hamilton as he stepped outside the back of the pit garage, failing to realise that there were no television crews in this area.

Massa appeared unstoppable now and the pace of his visible paternal concern showed as the race entered its final few laps. Hamilton appeared to staring down the barrel of defeat – rather than the lens of a DigiBeta camera. But then, just when all seemed to be lost, the British hopeful suddenly got past some mechanics who were standing between him and a film unit.

Victory was his and he was able to celebrate with abandon as he knew that at last he was, without doubt, on television.