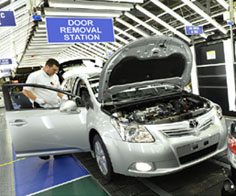 Whilst the rest of the British car industry idles its factories in the hope of reducing stock levels, news reach Sniff Petrol that Toyota has come up with an innovative plan to ensure that its plant at Burnaston in Derbyshire is kept running. Sources say the scheme will not only prevent over-stocking, it will actually reduce stocks of existing cars and is dubbed the Toyota Unproduction System or TUS.

TUS works by simply running the normal production line in reverse, starting with complete cars which are brought in backwards through the final inspection and rectification area and then progress slowly up the unproduction line being carefully dismantled. Whilst no other manufacturer operates a full disassembly line at the moment it’s thought that, if they did, Toyota would still be industry leading with the ability to unmake an Avensis saloon from finished car to big pile of parts in just 10 hours.

Naturally the TUS leads the way in other areas too, such as a highly efficient ‘Lean Unproduction’ system which means boxes of parts which have been freshly removed from cars arrive back at their suppliers ‘just in time’ to become their problem.

Finally, the real key to the Toyota Unproduction System is flexibility which is why, according to early reports, the disassembly line can cope with any model originally built at Burnaston and not just the Auris and Avensis normally made there. This means that Toyota can not only reduce stocks of new cars but also offer customers the chance to have their own car disassembled. This is particularly good news for owners of the original Carina E who may wish to discover if that annoying rattle in their minicab is caused by 400 kilos of lost change, pens and mobile phones jammed under the back seat.

Meanwhile, in France Citroen is said to have been working on its own car disassembly system, although in this case there will be no need for the cars to be returned to the factory.