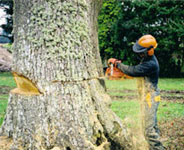 Whilst the car industry waits for the government to decide on a German-style ‘scrappage scheme’ for cars there was good news for Britain’s beleaguered sapling planting businesses this week as ministers announced a new Sawage Programme for old trees. Under the new initiative, anyone with a tree over nine years old will be able to claim £2000 towards the cost of a new sapling if they cut down their old tree, chop it into little pieces and then burn it.

‘This will be a great boost to the tree growers of Britain,’ said David Short-Termism, the minister responsible for introducing the new scheme. ‘As the current economic crisis worsened, this vital industry reacted as best it could by continuing to plant acres and acres of saplings. Unfortunately, demand for these trees has slowed dramatically and now is the time for the government to use your taxes to offset their ineptitude.’

Mr Short-Termism also believes that encouraging people to destroy older, more interesting trees will have a valuable environmental effect and denies that old oaks, horse chestnuts, elms and so on can actually be better for the environment; ‘Old trees are often very dirty with moss and have squirrels living in them. By chopping down such trees and replacing them with a clean new sapling there will be a marked reduction in such factors as the amount of leaves dropped in Autumn and some other tissue thin reasons I haven’t thought of yet’.

The new scheme has been greeted with delight by major tree growers and by the bodies that represent them including the Society of Tree Growers & Planters. ‘This is exactly the sort of flimsy quick fix our industry needs,’ said STGP spokesman Mhike Dhesperation. ‘A brief period of slightly increased tree buying activity will certainly see us through the recession. Assuming of course that the recession only lasts a couple of months and then everyone who’s already chopped down an old tree and bought a new one decides they want to buy another new one. And that’s exactly what’s going to happen isn’t it? Erm…’

* Not in the Frank Carson sense of the phrase