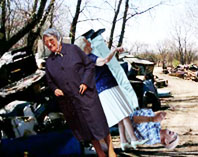 Following the success of the car scrappage scheme in the United States, President Barrack Obama is set to reveal a radical extension of the plan as part of his controversial healthcare reforms. Under the new scheme, unofficially titled ‘Cash For Old Bastards’, Americans will be able to trade in their troublesome elderly relatives and receive a brand new child at a significantly reduced cost.

“This is a great way to get old, inefficient people off the streets,” said White House spokesman Jack Badgerburger. “Elderly people pollute the air with their meandering and pointless stories about the old days whilst also making your couch smell of pee. With this new scheme Americans can finally get rid of that annoying grandfather or great aunt and replace it with a clean new baby”.

However, the new scheme is already provoking controversy across the United States, especially amongst rapist-faced right-wing commentators dressing up flimsy invective as ‘news’. “This is nothing short of gosh darned Nazi Communism,” spluttered Rhett Secretligay of Fox News. “This kind of unconstitutional bullplop might work in backward Socialist places like the United Kingdom of England but here in the US we look after our older citizens by giving them a state-funded Medicare system just like they have in England. Oh… damn”.

Even so, critics of the new proposal aren’t limited to gimlet eyed lunatics on mainstream news channels. Some relatively normal people have been quick to point out the flaws inherent in the new plan too. “It’s all well and good taking these elderly people off the streets but what are we going to do with them then?” demanded Luanne Monkeyburger of the action group Mothers For Firing Off Guns Into The Air For No Readily Apparent Reason. “I worry that many people will be throwing away a perfectly good grandmother or kindly uncle and, as I understand it, once an old person has been taking in against a new child they cannot be sold on, even though many families may be able to make good use of a serviceable grandma with her stories about the 1940s and her ready supply of weird candy you can’t find in stores any more”.

Other groups, however, were more sanguine about ‘Cash For Old Bastards’. “Of course this is an outrage,” said Chut Swanburger of action group Midwesterners For Darn Well Letting Me Kiss My Darn Sister If I Wanna. “But this ain’t half as big a problem as Obama’s other darn healthcare reforms. I jus’ saw on Fox News that he’s gonna start sending Death Squads into the streets to harvest innocent citizens for their organs. Gosh darn Socialist Commie Nazi bastard”.