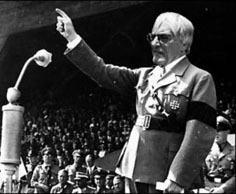 German leader Adolf Hitler sparked controversy again this week (in 1933) by appearing to praise F1 supremo Bernard Ecclestone as a man who could “get things done”.

Speaking in an interview with The Times, Mr Hitler said, “Terrible to say this I suppose, but Bernie was, in the way that he could command a lot of people, able to get things done”.

F1 groups were quick to damn the mono-testicled lunatics remarks as “insensitive” and “just plain wrong”. One team source added, “Mr Hitler should think before he makes such ridiculous remarks. Has he stopped to consider the untold suffering that Bernard Ecclestone has caused over the years or paused to reflect on the evil horrors he perpetrated across the world? And I’m not even talking about his daughter’s pathetic attempts to be a television presenter”.

In light of the outcry caused by his remarks, Mr Hitler was quick to apologise for any offence he might have caused. “I am extremely distressed and embarrassed that these remarks have been used as suggesting I support Bernard Ecclestone,” he said in a statement. “I just meant he was quite good at insisting that all the lorries in the paddock are lined up neatly. However, I do not support such a despicable person nor do I endorse his disgusting reign of terror”.

However, Mr Hitler’s apology may have come too late for many F1 followers. “Oh God, not Nazis and motorsport again,” said one ardent motorsport fan. “Still, at least it’s not that bloody clip from Downfall with some supposedly funny subtitles about Porsches or motorbikes run across the bottom. Jesus, that’s become less amusing than finding blood in your underpants”.