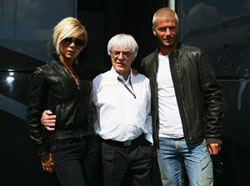 The unveiling of the contenders for 2009 F1 season has led to disappointment amongst many motor racing fans with some questioning why they have to look like sort of crap F3000 cars from a few years ago. Now Sniff Petrol can exclusively reveal the reason behind this – F1 is in fact going to become a sort of F3000-style lower formula, playing second fiddle to brand new top line race series being hatched in secret by the sport’s governing body.

Sniff Petrol spoke to a man with this ear to the ground outside FIA headquarters in Paris; ‘Oh God, I’ve just put my head in a dog turd,’ he said. ‘Jesus, there’s actual shit in my ear. Errr, errr, errr…’ he added mysteriously.

Meanwhile, other spies close to those at the top of motor sport say the new series is intended to make racing more popular and in line with the trends of the day. ‘We’ve realised that Formula 1 is basically a bit too complicated and nerdy, especially for today’s increasingly stupid Heat magazine reading generation,’ said one source. ‘You never see Frank Williams coming out of a nightclub in London’s West End with two mystery blondes on his arm and this just won’t do. That’s why in future F1 will be secondary to our new pinnacle of motor sport formula which will feature entries from Team Beckham, Scuderia Katona and Jordan. The fake knockered model, rather than the fake haired Irish bloke.’

Mindful of the concern that such well known tabloid favourites have no actual experience of setting up and running a high level race team the FIA has already decided the new top formula will feature no actual cars. ‘Cars are too geeky,’ said one insider from inside something. ‘Instead, this exciting new race series will visit some of the most glamourous locations in the world, such as Monte Carlo, Melbourne and Barcelona, and at each place the teams will simply have to go out for the night and compete to see who can appear in the following day’s newspapers caught stumbling out of a club at 3am. It’s not only a lot cheaper than actual racing, it’s also perfectly atuned to our lucrative target audience of grunting thickos who pore over gossip magazines but have no idea of, say, the name of the Chancellor of the Exchequer.’

FIA spies say that, whilst plans for the new race series are well advanced, there is still some controversy over its name. ‘Clearly F1 is called that because it used to be the very top,’ said one mole. ‘That means we’re a bit stuck on numbers. At the moment we’re probably just going to call it F-Bling, although there is some worry that this sounds like it was invented by a retarded child. Funnily enough, it was actually thought of by a hyperactively troublesome small person. You know him. Bernard something or other…’

Maldonado gets own race series