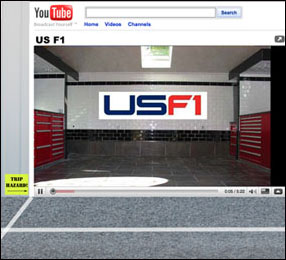 There was good news this week for the fledgling US F1 team with the announcement that its debut season will be sponsored by YouTube, a move that will bring all the values of the popular video sharing website to America’s 2010 Formula 1 entry.

The first corollary of the new deal will be seen in the advertising carried on the car which will move and flash annoyingly, but only down one side. This will leave the main body of the machine free to carry liveries that will reflect the content of YouTube itself. American sources say during the first race, for example, the front of the car could carry some almost unwatchable footage filmed illegally at a Justin Timberlake concert. By the next race, however, this will have been mysteriously removed but it will be replaced with a pointless image of a mildly inbred American teenager endlessly performing wheelies on a small bicycle which will in turn give way to some needlessly macabre images of air disasters inexplicably set to the theme tune from Knight Rider.

The YouTube link up also promises to have a unique effect on the way the entire team’s efforts are seen on television. Whilst the rest of the 2010 F1 pack can expect to be filmed using state of the art High Definition TV cameras, the US entry will be exclusively covered on a low quality mobile phone promising unmatched levels of wobbliness and the constant sound of some unseen people noisily whooping and giggling just out of shot.

Finally, as a tribute to their title sponsors it is expected that during busy parts of the race the US F1 cars will become annoyingly slow and then crash. Although they’d probably have done that anyway.